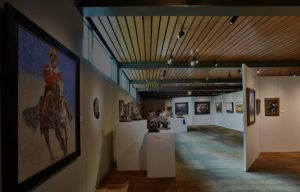 There’s always been a love-love relationship between museums and ghosts. Between those two entities, there really is no blood loss. Maybe it has to do with the fact that museums are nothing more than cabinets of curiosity. They are huge houses where folks store old arcane detritus, steeped in history and a few bloody mashes… They are also repositories for our passions, our artistic upswells, our maddening descents into corners of our psyche we rarely come in contact with.

An art museum is a depot for all those pieces of human-made expression and artistic flourishes that partially capture their maker’s spirits. People pour their souls, trials, triumphs, tribulations, and heartaches into their pieces. Artists use the canvas or the clay, the pen or the chisel, to exercise their inner demons and inflamed passions. That’s partly why museums, particularly those of an artistic vein, seem like the proverbial flame to the ever-vigilant monthly ghost.

The History Of The Briscoe Western Museum.

The Briscoe Western Art Museums is a revived community and culture center that maintains a regional tradition based on learning and understanding. The whole affair of the museum starts back in the heydays of the 20th century, 1903 to be exact. Back then, the building was, in fact, River City’s very first public library.

“It was initially called the Carnegie Library.  the project was funded with a $50,000 gift from the philanthropist Andrew Carnegie. It became the first of his Texan libraries. The man ended up erecting more than 32 in the state.”

One of the biggest draws and the reason why this library – aside from being the first of its kind in the city – is so fondly remember was on account of its progressive views towards racial equality… In the sense that it was a huge bigot. The library stood as a monument to Jim Crow laws and eventually served as an inspiration for the African American population to stand up and demand the building of the Carver Community Center in 1930. In a sense, the Carnegie was instrumental – as an opposing force – for the construction of what the authorities would later name the “Negro Library.” It was a beacon of racial oppression.

In 1921, the historic flood that swept the city ate up most of the original building’s foundations. The library, as well as most of the city, suffered from extensive property damage. San Antonio’s infrastructure, the library included, became death traps. Buildings collapse, foundations blossomed into pits and the loss of life was staggering.

“During those days, people sought shelter within the library… Some of those unfortunate suffered when part of the building collapsed. A few of them were instantly killed while others wallowed way trapped under the rocks, and drowned as the floodwaters came in.”

Some of the ghosts that haunt San Antonio, and particularly this area are those of these unfortunate. People coming on sewer grates and hearing voices and lamentations.

In 1929, The Carnegie was demolished. The flood damage and neglect brought on by a political administration with dwindling funds and in a recession ended up burying the old dame. That very year, architect Herbert S. Green, bought the land for a fraction of its original cost and designed the current art deco structure. It served as the Main Library until 1968.
Now, let’s take a side route. We need, to understand how this place transformed from a library to an art museum, talk about a San Antonio Lawyer named Harry Hertzberg. In the midst of post World War II euphoria, the country was in an economic upswell. Folks were coming out other depression and the Capitalist view of investing your money not only for your own grandeur but that of the nation was becoming the US’ religious proclamation. Harry, one of San Antonio’s most lucrative lawyers had amassed the largest collection of circus-related memorabilia in the nation. The collection was collectively known as the Hertzberg Circus Collection.
In 1968, Harry went and donated the spoils of his Ringling Brothers to the Green estate and they, in turn, decided to unseat the library – move it to a new building at South St. Mary’s Street – and use the art-deco building as a museum. The Hertzberg Circus Museum, which included the Tom Thumb collection, stayed in the building at the corner of Presa and Market streets. until it was closed in 2001.
The building was shut down and partly closed for over 16 years. It felt to the destructive powers of time, weather and disrepair during that period. It became a shambling edifice, the sort of spot Hollywood would shot in if they wanted to make a low budget horror movie.
Then, Ex-Texas. Gov. Dolph Briscoe (served in office 1972-78) and his wife, Janet Slaughter – one of the state’s largest landholder and most generous philanthropist – started conceptual meetings with various head officials for what he deemed:
“A repository of our artistic roots.”

With a donation, straight out of his pocket, of $4 million, the idea started to flourish. The idea grew from Briscoe’s obsession with transporting an impressive art collection from Kerrville to San Antonio. Kerrville is the place where the original The Museum of Western Art is at.

“The art museum is part of this renaissance of the historic urban core and the conversation about culture in San Antonio. We’re not a history museum, we’re an art museum … history clearly plays a role in what we do, we want the viewer to interpret the exhibits on their own.”

The Hauntings At The Briscoe Museum.

Psychics and investigators have gotten all sorts of readings and thermal images of apparitions, but in essence, most are likely no more than psychic residue; the leftovers from artistic fervor.

“All museums have these imprints. That one of the reasons why some artistic pieces make you experience emotions you normally wouldn’t associate with that particular form of expression. Some of us are more empathic or a-tuned to these waves. That why some people feel anger or sadness when viewing a painting while others can only analyze it from a purely objective POV.”

In spite of that explanation, the museum does have a ghost. A peculiar specter that has in fact haunted the land way before that first library opened its doors.

The Ghost Of John McMullen.

John McMullen was the first landowner of the soil where the Briscoe now stands.

McMullen originally bought the land in 1848 and build a cottage on top of the site. He was an enigmatic pseudo hermit with almost no ties to the community. Rumors started circulating that John had a rather vast fortune hidden somewhere in the property. His neighbors began to pay attention and the gossip mill circulated maddeningly.

5 years after having moved in, in 1853, shots were heard. The sheriff and neighbors ran up to John’s cottage and found the place ransacked and John’s bullet-ridden corpse on the floor. Versions of the tale started to circulate and all fingers pointed to John’s adoptive son, a boy that by that point in the story had headed out to greener pastures.

John’s killer or killers, in that home invasion, were never caught.

Staff members constantly complain about the spooky atmosphere that normally surrounds the building’s river-level basement. Constant cold spots assailing them; pricks in the back of their necks; the feeling of being watched over. The basement has become one of the most visited holy sanctuaries for paranormal investigators.

Elsewhere in the museum, there have been numerous reports shadowy apparitions, shimmering lights, strong banging and strident noises in the middle of the night.

“Sometimes, you hear a soft whisper right at the edge. Something calling out to you. I don’t know if it’s McMullen’s spirit or something far worse… But it’s really strange and there’s a feeling of dread that instantly follows it.”