Chupacabras – The search for the goat sucker 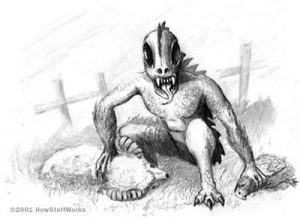 I remember when I was a kid channel surfing, thinking of news in the same way a vampire thinks of holy water. CNN, Fox News, NBC News, a waste of space that robbed me of precious cartoon time. Then, one day, while damning the gods that the Simpsons weren’t on I stumble on an adolescent’s 90s’ journalistic dream – nope, not Bill Clinton explaining to Congress how to employ a cigar and what that protein stain on Monica’s dress was – but El Chupacabra. A bell rang and suddenly those talkie heads with the huge hairdos were interesting. Every day, during 1995, Chupacabra fever swept the nation, and there was something to gawk at on the television. It was my first forrays into journalism and my second into Latin American soup-operas.

The Goatsucker attacking Cartels in Mexico; El Chapo beating back a herd of the blood fiends with tequila Molotov cocktails. National Security advisors coming on Larry King and telling folks that, “no, we didn’t bioengineer el Chupacabra in some secret off the book’s lab.” Dime store merchants making a killing in knock-off “Chupame esta, el Chupacabra” t-shirt. Folks with funky afros and the faraway stare of the terminally in Woodstock going on panels and pontificating on transdimensional travel, little green men, and the hallow earthers. It was a magical time.

So, today we are going to slip into our time-machine and go and explore the epidemic that was the Chupacabra. A world without el Goatsucker, like a world without the skinwalkers, is a world without guacamole, or nachos con carnitas, or Negro Modelos. Let’s acknowledge that el Chupacabra makes our lives that much more interesting. If anything, that’s a fine reason to boycott the wall… how are the Chupacabras supposes to get in? Think about the poor Chupacabras!!!

What is The Chupacabra?

The chupacabra or chupacabras, cause’ in all likelihood there’s probably a colony of the fiends, is something… we just don’t know what. Mass hysteria? An advance invading army? A hoax?  An unknown animal? A hairless dog, like a chihuahua only on steroids?  No one really knows, and that’s part of the fun.

El Chupacabra; from Spanish: chupar, ‘to suck’, and cabras, ‘goats’ is a mythological beast in the folklore of the Americas. The designation is accredited to Puerto Rican comedian Silverio Pérez, who minted the name in 1995 while discussing the attacks. Let’s be honest, we can’t make this up? Other animals are designated by scientists, the Chupacabra’s nomenclature comes courtesy of a Deejay/comedian. Pure gold.

It was first sighted in Puerto Rico in 1995. From that one sighting, the creature boomed into a phenomenon, not an occult phenomenon but a pop-culture one.

The title comes from the animal’s recorded vampirism; the goat-sucker likes to slurp up the blood of livestock and leave them dry. His favorite dishes include goats.

Descriptions of the being differ. It is purportedly a huge animal the size of a small bear, with a row of spines stretching from the neck to the base of the tail and two big black eyes. The usual depiction of the chupacabra is that of a reptile-like creature, some even point out the similarities to aliens. The creature is said to hop like a kangaroo. The chupacabra is supposed to remove an animal’s blood – and sometimes organs – through three holes in the shape pointed triangles. Holes that are produced by a tube-like meaty tongue that works like a syringe.

Many reports of the Chupacabra, particularly those that leave a body – once a trigger happy hunter goes KABOOM on their behind – have been verified by officials as canids afflicted by mange; particularly those in the southern United States next to the Mexican border.

The first recorded attack of the creatures happened in March 1995 in Puerto Rico. Eight sheep were found inert on the ground, each with three holes in the chest and thoroughly drained of blood. A few months later, in August, an onlooker named Madelyne Tolentino recounted seeing the animal in the Puerto Rican town of Canóvanas. Soon after, in that same town, more than 150 farm animals and pets were killed by something.

Journalists and researchers flocked to the scene when video coverage of the phenomenon started racking huge ratings. They uncovered that in 1975, similar slayings in the small town of Moca were attributed to el vampiro de Moca (‘the vampire of Moca’); killings that were never clarified.

Originally, it was assumed that the killings were performed by a Satanic cult. There was a crackdown of santeria and other fringe religions by the authorities. Then, more killings were recorded throughout the island. Dozens of farms reported a substantial loss of animal life. Again all the bodies were bled dry through a series of small circular incisions.

Quickly after the initially reported cases in Puerto Rico, other animal deaths were announced in other countries.

A five-year study by Benjamin Radford, documented in his 2011 book Tracking the Chupacabra, resolved that the information given by the original witness in Puerto Rico, Madelyne Tolentino, was based on the monster of Sil in the 1995 science-fiction horror film Species. Sil, it turns out, is nearly identical to Tolentino’s chupacabra.

“It was a creature that looked like the chupacabra, with spines on its back and all… The resemblance to the chupacabra was really impressive.”

Tolentino later reported that she “believed that the creatures and events in Species were happening in reality in Puerto Rico at the time.”

Species, for those not into 1995 alien erotism – there’s really no way of properly classifying the film – is a movie, which later spawned a film series, about a seductive extraterrestrial human-hybrid. Said ET hybrid’s mission is to successfully mate with a human male. The creature’s alien form was sculpted by H.R Giger, the same fella’ that created the Xenomorph (Aliens) iconic design. In its human form, the creature was portrayed by former model and hot tamale, Natasha Henstridge. It became a box.-office success and garnered a cult following. For a time, during that year, you could go anywhere without a mention of Species… Why? Was it any good? What made it so transcendental? Wait for it, it just adds to the insanity and madness that is the tale of the Chupacabra.

The film was met with lukewarm reviews and only became an international sensation due to:

“The hype surrounding Natasha Henstridge’s topless scenes. Various tabloid newspapers and lad mags of the time reporting heavily on it.”

That’s right, the creature that was named by a comedian, as partly inspired by humanities need to see breasts… The 90s were wild.

Radford broke the chupacabra reports into two divisions: the reports from Puerto Rico and Latin America. Reports of huge animal deaths and cattle mutilation with blood extraction. And the reports in the United States of mammals mostly dogs and coyotes with mange. One is still unexplained. The other, according to a chemical study performed by the University of Michigan biologist Barry O’Connor were just animals with parasites.

“Attacks on livestock occurred because these animals are greatly weakened, [so] they’re going to have a hard time hunting. So they may be forced into attacking livestock because it’s easier than running down a rabbit or a deer.”

The “Ozark Howler”, a large bear-like animal, shares a similar description to the chupacabra. In the Philippines, another mythological beast called the Sigbin might be a chupacabra.

To this day, in spite of all inquiries, scientists still don’t know what killed all those animals in Puerto Rico… and contemporary reports of the Chupacabra still flood supernatural forums.

Some say the mystery has been solved, but I rather turn a blind eye and believe in fairy tales… Pixies can fly and the chupacabra is real, don’t dull my reality.