Our Lady Of The Lake 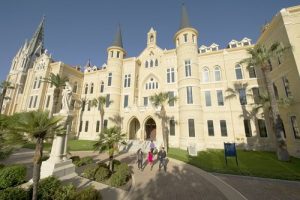 Fever minds spun fever dreams… and, when said, minds go off to college – the eager savage ape of experimentation riding their backs – prepare, for all hell will break loose.

College as a whole is a pandemonium circus act, one of those duets with acrobats balancing on a tight rope while riding a pony and juggling chainsaws, between the voice in every kid’s ear fostering their ambitions and intellectual curiosity and the screaming wails of a lizard brain slapping their loins and going:

“It’s just a quick snort… Trust me, there are pills if it gets you too wound up.”

If, into that mess of adrenaline, hormones and wild invectives and foolhardy decisions you add ghosts, then, you might as well give J.K. Rowling part of what your college has collected in tuition cause what your academy is doing is practically copyright infringement.

Our Lady Of The Lake is Hogwarts, only less Monty Python and more Saturday Night Live. It’s the sort of place where Voldermort would get his keister handed to him by banjo dueling specters and chaw chewing, Second Amendment loving, poltergeists.

The History Of Our Lady Of The Lake University.

OLLU, cause institutions just love abbreviations and code names, locally known as the Lake is a Catholic university in the San Antonio region of Texas. The house of learning was founded in 1895 by the Sisters of Divine Providence (The Congregation of Divine Providence).

The sisters are religious institutions that originated in Lorraine, France, during the 18th century.  They develop most of their teachings and outlooks on the work of the Blessed Jean-Martin Moye. Moye was a French Catholic priest that saw as a great sin the lack of educational opportunities for females in rural France. He dedicated his life to the instruction and care of the needy as well as the propagation of scholarly education. Moye, trained dozen of pious women, who lacked all manner of formal knowledge and in many cases were illiterate, in child psychology. His general thesis was that with this weapon at their disposal they could provide instruction and special help to the less fortunate and poor.

His methods expanded and the women started opening cells and institutions around the world. Moye died in 1793, he had contracted typhus while nursing refugees. In 1954, Pope Pius XII beatified Moye.

Let’s slip back to The Lake. Construction of the main campus began in 1895, and by early 1896, the high school educational program was already bringing in kids. Since that moment, its curriculum and tasks her only expanded. Our Lady of the Lake College was a vanguard in the field of women’s rights and the female emancipation movement in Texas. By 1911 it had a varied curriculum and higher learning programs dedicated to women’s studies.

In 1927 it became the third Texas school to be approved by the American Association of Universities.

The Hauntings at Our Lady of the Lake.

With more than 100 years under its belt, the Lake is bound to have a spirit or two wandering around. One of the most haunted spots in the whole campus is Pacelli Halls, a small residential hotspot for students to linger.

Pacelli Hall was and quite frankly is ground zero for the supernatural at the Lake. The wraith that seems to go bump in the night is known as Jack.

“Jack’s sort of our resident Slimer. He’s everywhere. The minute you crash into the Lake and you’re unpacking your stuff, someone will come up to you and tell you about Jack. I was hauling my stuff in when my roommate came up to me and said: ‘better watch out for your stuff, Jack likes to screw with newcomers’.”

Jack, according to most who have seen him or been in the vicinity of shenanigans, is your every day Dennis The Menace sort of spook. He’s responsible for all manner of countless pranks and tricks. From locking door and trapping them.

“I was in the restroom when suddenly the door was locked on both sides… Which is kind of impossible, right? I had to phone a friend to help me up. The janitor actually had to come and cut the lock off the door in order to let me out.”

To turning lights on and off.

“You’re running by a dorm room or a class-room and suddenly the lights switch on. You backup, trace your steps, and BOOM, the lights go off. You start up again, and the switch on… It’s like a Benny Hill skid.”

Jack’s one of the most famous and quite frankly most documented ghosts in the region. He’s become so popular among the natives that he’s even been featured in various editions of The San Antonio Magazine; the wild annoying sprite listed as a bonafide haunting in the city.

“I’ve seen some strange things. ‘Felt’ a presence ad witnessed things moved around. I don’t know if it’s Jack or not, but I’ve felt something weird in certain places on campus”

There are two explanations for Jack. The supernatural and the skeptical. Proponents of the first believe that Jack’s a really a kid ghost. His antics, his silly jokes, and pranks, his annoying little habits seem to coincide with the attitudes of a kid. His paranormal wanderings go hand in hand with those of a toddler.

The skeptics, meanwhile, rally behind a more academic explanation.

“Jack was created by a student as a social experiment. He’s made up, a figment by the Psychology Department. This student wants to demonstrate how quickly a rumor could be spread and adopted. She created the lore of Jack in order to study the effects a clearly false supernatural story could have on the dynamics and interplay of a group of individuals.”

And Jack’s not the only restless dead in the area… he’s just the cutest of the two that call Our Lady of the Lake their home.

There’s a specter a bit more sinister and insidious roaming the halls of the University.

“The place is defiantly haunted but not by a boy named Jack. I hear things and notice things. There’s something evil or otherworldly in this place.”

Most of the other hauntings are a bit more hair raising than a simple prank. They are full-fledged horror movie and balls to the wall scary. The general description of the entity perpetrating them is of a woman in black, possibly a nun who lived in the old convent, with long raven hair and something of an unsettling vibe to her. She’s believed to be an omen of ill times. She was there when a fire broke out in 2008. Her image was seen weeks prior to the disappearance of various girls around campus. And, when Kennedy was shot in Dallas, students swore the saw her figure staring out a window in the direction of that city.

“When I was a student I took a film class in the Fine Arts building. I went to use the restroom when suddenly I saw my friend Tammy. I saw her go into the restroom and I ran to catch up with her. I reached out for the doorknob just as it slammed shut before I could grab it. I barely missed the door, that is what stands out the most, the door slamming shut right in front of me. But when I entered the restroom, there was no one there. It is a one-person bathroom.”

The restless nun has been, as opposed to Jack that likes to call Pacelli Hall his home, seen all around campus. Her story is the kind of nightmare fodder students like to tell each other just to raise hell and cause a bit of panic.

“I thought people were going to say I was crazy or on drugs. I’ve never seen Jack, but the nun, the nun is something else… I’ve defiantly seen the nun. There’s this grotto and dozens of students, I included, have seen a woman crying near it. It’s really freaky because each time you try to get her here, she just disappears.”