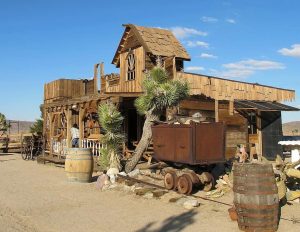 The wild, wild West. An American heritage, The West has been the backdrop for some of the most infamous and brutal stories to come out of American history. Desert sands pave the way for outlaws and vagabonds alike. History is riddled with tales of fearless, gun-slinging bandits, terrorizing small towns, and riding away into the sunset on their horses. When we think of the west, we remember the tales of saloon doors, the once rowdy bar falling silent as the unknown desperado stands strongly in the doorway. The floorboards creak as he makes his way to the bar top, there to serve some vigilante justice, or save a damsel in distress.

Tales of these outlaws have gone down in history, preserved for hundreds of years for us to remember. Many of their lives ended in tragedy, and to this day, stories of their forever-wandering spirits live on. Below are some of the most infamous, the most terrifying outlaws in history, and how their ghosts live on, continuing to terrorize the towns they used to frequent.

Perhaps the most infamous outlaw of history, Jesse James’s corrupt past tells a tale all its own. Born a preacher’s son in Clay County, Missouri on September 5th, 1847, Jesse Woodson James was the son of Kentucky native Zerelda Cole James and her husband Robert James. His father was a Baptist minister and slave-owning hemp farmer. In 1850, Robert James traveled to preach in the cold mining camps of California, but he never returned to the farm. Shortly after he arrived in California, he fell ill and died of a Cholera infection. Zerelda was plunged into horrible financial difficulty, left alone to take care of young Jesse and his two siblings. As they grew, knowing the financial straits their mother had weathered, the draw of the outlaw lifestyle was just too strong. Both James brothers became notorious and violent highwaymen, their mother a staunch supporter of their lifestyle.

In 1861, Missouri became rife with conflict and violence. The state was torn in two, the settlers siding with the South, yet Missouri’s economy was linked directly to the North. Missouri had voted against secession from the Union, but there was a significant number of people who held Confederate sympathies which led to the formation of two separate governments with differing allegiances. After the Civil War, Jesse had grown a hatred for all things ‘Yankee’ and took it upon himself to continue the violence that the Civil War had brought. His reign of terror began in 1864, when he joined “Bloody” Bill Anderson’s guerilla forces at the age of sixteen. Their first attack was in the town of Centralia, where Bill’s gang of over 100 men robbed the passengers of an incoming train. Twenty-four Union soldiers were taken from the train and murdered. The Union army lost 120 troops that day, while Bill only lost three. Both Jesse and his brother Frank were part of the battle. Shortly after, Bill Anderson was caught and decapitated by the Union. Jesse attempted to surrender when he rode into Lexington with a white flag, but was shot in the chest. He survived this attack, and lived on to commit heinous crimes, and bank robberies, with just under $250,000 being stolen in 16 years.

In April of 1882, Jesse was betrayed by one of his own members, Bob Ford. He had his back turned and Bob shot him in the back of the head, killing him instantly. He had reportedly been swayed by the prospect of reward money and took Jesse’s life. The betrayal carried on with Jesse into the afterlife, as his tombstone reads “Jesse W. James, Died April 3, 1882, Aged 34 years, 6 months, 28 days, Murdered by a traitor and a coward whose name is not worthy to appear here.”

The Ghost of Jesse James Lives On

The James Farmhouse is said to be heavily haunted to this day. It’s no surprise, considering the violent temperament of its inhabitants, the untimely death of Jesse himself, and the violence that occurred on and near the property. Jesse was buried on the farmland, and later exhumed and reburied at Mount Olivet Cemetery. The James Family Farm is said to have been haunted for more than a century. Lights are reported to move about inside and outside of the home, phantom gunshots and hoof sounds are also heard. The staff of the house tell of feelings of an ‘intense presence’ within the home and others report hearing hushed voices and horses in the nearby woods. Locals say that the spirit who resides here is in fact Jesse James, finally settling down for a ‘life’ on the farm after a life on the run.

Famous Marshal of Tombstone, Fred White brought order to the infamous boomtown known for its unruly citizens and shootouts. Fred was a lawman and chief of police in the town. He was successful in his upkeep on the town, until an encounter with a drunken man ended with an accidental gunshot. The accident occurred while White was attempting to disarm a man who had a bit too much to drink. White was shot in the groin and died shortly after from blood loss. Fred White’s friend, Wyatt Earp, witnessed the skirmish. The drunk man, later to be identified as Bill Brocious, was acquitted and cleared of all wrongdoing. But tensions began to arise between Earp and Brocious, leading to a famous gunfight that killed three men at the O.K. Corral in Tombstone a year later. Today, Tombstone remains the hangout for the ghosts who witnessed the legendary gunfight, and Fred White is reported to have been seen patrolling the streets, still attempting to keep the peace in his rowdy town, even after his death. Guests of the Corral today report multiple poltergeists and apparitions of men in cowboy attire, appearing with their guns drawn.

Deadwood, South Dakota was founded during the Gold Rush of the Black Hills. The land belonged to the Lakota People, but once gold was found in the hills, miners and gunslingers from all over the country floated in like hurried tumbleweeds, rushing to make a quick buck. Seth Bullock, a famous lawman, came to Deadwood to help settle some of the lawlessness. Bullock had an imposing appearance, tall with grey eyes, commanding instant respect. His grandson said of him ‘He could outstare a mad cobra or rogue elephant.’

A New Sheriff in Town

After his arrival, Wild Bill Hickok was murdered by Jack McCall. McCall shot Hickok in the back of the head while he sat and played poker. The demand for law enforcement grew daily, and Bullock’s experience made him the logical choice for Deadwood’s first sheriff. He eventually opened a luxury hotel in Deadwood by the name of Bullock Hotel, which became his pride and joy. So attached to his hotel in life, he remains there after his death in 1919, inspecting hotel rooms and making sure everything is business as usual.

Employees of the hotel have reported seeing a tall ghostly figure patrolling the halls, including the restaurant and basement. Apparently, Bullock’s spirit is making sure the staff is working hard, as he is said to appear more often when staff members are idle. Plates and glasses have been known to fly off tables, and lights turn on and off in the restaurant on their own. Even guests at the hotel have heard their name called or being tapped on the shoulder by unseen hands. The Bullock Hotel has even been featured on the TV show Unsolved Mysteries.

Who is the Lost Dutchman you may ask? The story goes that a German immigrant by the name of Jacob Waltz came to America in search of gold in Arizona, and ended up recovering a lost goldmine that had been the subject of legend for years. During the 1840s, the Peralta family of Mexico developed a rich gold mine in the Superstition Mountains. In 1848, they were ambushed by Apaches, and all were killed except for two family members who made it back to Mexico. Numerous maps had surfaced of the mine, but each one has become lost or misplaced when interested parties pressed for facts. The mine became lost and sat dormant until it was discovered again by Waltz in the 1870s. It is said that Waltz located the mine with the help of a Peralta descendant. He reportedly had been carrying large saddlebags completely filled with gold when he passed away in Phoenix, the location of the mine dying with him.

Will the Mine Be Uncovered Once More?

To this day, treasure hunters have flocked to the mountain in search of the Lost Dutchman’s Goldmine. No one has ever found it, however. Yet, the legend of the lost gold maintains, even though it is reported that Jacob Waltz himself guards the location and causes those who get to close, to become disoriented and lost in the mountain range. Searchers have even been met with foul play or death when looking for the lost mine, which heavily contributes to the superstition and legend surrounding the Lost Dutchman’s Mine.

The Wild West lives on, spirits and ghosts of outlaws and sheriffs passed marauding and wandering the plains and deserts they used to call home. The history of what happened there pulls them close, keeping them riding into a phantom sunset, day after day. For another truly terrifying desert dweller, read about El Chupacabra here!