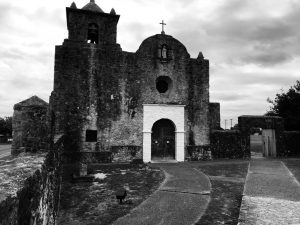 The Presidio La Bahia is a little known Spanish fort and mission in Goliad, Texas. The fort has existed at its current location since 1747, but was first built in 1721 before it was moved twice. The Presidio La Bahia served as a fort for the Spaniards, helping to protect shipments from Native Americans, the French, and the British. Originally built out of wood, La Bahia was rebuilt with stone after the French retreated and ceded all Texan claims back to Spain. Being the only Spanish fort between the Mississippi and the Rio Grande, La Bahia became an important stopover point for trade, and also played a major role in the Mexican War of Independence. The Presidio La Bahia is most known for its role in the Texas Revolution. After a Texan victory at the Battle of Goliad, troops stationed at the fort were to be sent to San Antonio de Béxar to support their brethren under siege at the Battle of the Alamo. The men were ambushed after the Mexican victory, and they were lined up and shot outside of the fort in what is now known as the Goliad Massacre. The worst treatment was saved for Colonel Fannin, who was shot in the face, beaten, and his body burned. The Presidio Nuestra Señora de Loreto de la Bahía, or the Presidio La Bahía for short, is now a Catholic church and museum. The Presidio and surrounding area are haunted by the ghosts of those who died in the bloody massacre. Many have heard the blood curdling screams of soldiers begging for mercy. Others have seen “phantom blood” on the quadrangle, where the soldiers were killed. The ghost of Colonel Fannin is often seen sitting in the quadrangle awaiting his execution. The chapel, called Our Lady of Lareto, is full of spirits from past ages. Churchgoers often hear the sound of crying babies and see the apparition of a young woman holding a candle.

During the 1700s, the Spaniards began building forts in Texas to protect against the encroaching French colonists. They discovered that the French had built a fort within their territory, called Fort Saint Louis. Fortunately for the Spaniards, the Karankawa tribe had already destroyed the fort and killed most of the occupants. At first the Spaniards buried the remnants, but returned some years later when it was recommended that they fortify Texas. Unable to bring the native Karankawa tribe into a Catholic lifestyle, they moved the fort to a location on the Guadalupe River in present day Victoria County. This remained the site of the Presidio for the next 23 years.

The government of Spain sent Jose de Escandon to inspect South Texas, and he recommended that the Presidio La Bahia be moved further south to better protect the settlements along the Rio Grande. Escandon chose a location along the San Antonio River and established the Presidio at its present location in 1749.

The Presidio La Bahia was fortified with six 8 lb cannons and armed with a garrison of men and horses. A chapel was also built which still exists today. Their main mission was to protect shipments going to the Rio Grande and San Antonio de Bexar from Native Americans and the French.

At the end of the Seven-Years War in 1767, Spain inspected the surviving forts in Texas and ordered them all closed, as the French were no longer a threat. Only the Presidio La Bahia was to remain open, which the Spanish government ordered to be rebuilt with stone. Now being the only Spanish fort between the Rio Grande and Mississippi, the Presidio became an important stopover for military and trade routes, and was the second most important point in Texas next to San Antonio de Bexar.

At the outbreak of the Mexican Revolution, Texan governor Manuel Maria de Salcedo sent most of his forces from around the colony to San Antonio de Bexar, and the Presidio La Bahia was left with few men. This allowed the Republican Army of the North, a joint coalition of Mexican revolutionaries and American militias, to sack the Presidio in 1812. Salcedo attempted to siege the fort, but conceded defeat after 4 months. The militia held the fort for 4 more months, until the Spaniards sent loyalist troops to retake all of Texas.

The United States ceded over their rights over Texas to Spain with the signing of the Adam-Onis Treaty in 1821. Many Americans were outraged at having lost Texas, so James Long and the Long Expedition sought to fight back. They captured La Bahia for four days until the Spaniards forced them to surrender. By the end of the year, Mexico gained independence and La Bahia was under Mexican control.

The Texas Revolution: The Battle of Goliad

San Antonio de Bexar was the political center of Texas, and the Presidio La Bahia lie halfway between San Antonio and the Port of Copano. When the revolution broke out in 1835, the Texans marched towards La Bahia to capture and kidnap Mexican general Martin Perfecto de Cos. After hearing that the general had already left, they continued their march, as the Presidio was lacking the manpower necessary to defend itself. Locals from the surrounding city of Goliad volunteered, and the Texans outnumbered the Mexicans almost 3 to 1.

The Texans arrived at the Presidio La Bahia and attacked. They hacked down the door and stormed the courtyard. The Mexicans opened fire, and the Texans shot back for over half an hour. The Mexicans surrendered when threatened with being massacred.

After the Mexican Army retreated, more Texans joined the forces at the Presidio. The provisions left behind were rationed out to the Texans for the next three months.

Fannin became the leader of the troops at the Presidio La Bahia, and renamed it Fort Defiance. In 1836, Mexican president Santa Anna led a large force of Mexican troops to crush the revolution, and initiated the Battle of the Alamo. Colonel Fannin began mobilizing troops to support the Texans at the Alamo. When the Alamo fell to Mexican forces, general Sam Houston ordered all troops to retreat and ordered La Bahia to be abandoned. Mexican general Jose de Urrea captured Fannin’s men on their way out of the fort. President Santa Anna requested that the men be killed, but Urrea wanted to spare their lives. He reluctantly lined up the 450 men on the outside of the fort’s walls and had them shot one by one. The men who survived being shot point-blank were beaten and stabbed to death.

The Mexican soldiers saved the best for last. Colonel Fannin was sat in a chair in the courtyard and blindfolded. He had three requests; that he be shot in the heart and not the face, that he be given a Christian burial, and that his watch be sent to his family. The soldiers shot him in the face and stole his watch. While still alive, the soldiers savagely beat Fannin, then burned his body.

The bodies of the men were piled up outside of the fort, then burned. Their charred bodies were left exposed to the elements, and vultures had begun to feed on them. The bodies were found a few months later by the Texan Army and they were given a proper military funeral.

About 28 men feigned death and escaped the massacre.

The Ghosts of the Presidio la Bahia

The sheer amount of history and bloodshed has left behind a myriad of restless ghosts and spirits. Many who enter the Presidio La Bahia can still hear the painful cries and screams of the soldiers being massacred. Others have a strange sensation of being watched. Museum staff have claimed to hear constant footsteps when the museum is closed, and doors opening and closing on their own. The apparitions and shadows of soldiers have been seen around the Presidio, even during the day.

The ghost of Colonel Fannin can occasionally be seen in the courtyard. They say he appears blindfolded in a chair awaiting his execution. Witnesses claim that Fannin’s presence is accompanied by a cold sensation and chills running down your spine. His ghost is most often felt in the officer’s quarters near the chapel, where witnesses say that he appears along with phantom footsteps and the sounds of cannons firing in the distance.

Many of the soldiers were killed on the courtyard quadrangle. Visitors say they feel a strange energy when standing on the quadrangle, and some say they see blood splattered on the wall. The “phantom blood” phenomena is accompanied by the smell of rotting flesh. Vultures still flock to the quadrangle, as they too smell the faint odor of lingering flesh.

Our Lady of Loreto is the chapel within La Bahia, which still functions to this day. The ghost of a woman dressed in all black has been seen mourning while holding a candle inside the chapel. In the courtyard, a woman dressed in all white roams about, looking for a lost grave. A robed monk also patrols the chapel, scaring off any would be trespassers. The chapel is full of spirits, and churchgoers say they’ve seen them all. When the chapel is empty, witnesses have heard babies crying, the organ playing, and a woman’s choir singing, and the bells have been known to chime on their own.

Read about the haunted history of San Antonio!

The bloodshed from the Mexican and Texas Revolutions have left behind scores of haunts. Head on over to the Alamo, the most important fort during the revolution after Presidio La Bahia. Spend the night at the spooky Emily Morgan Hotel, just across the street from the Alamo mission. If you want to hear some cool Wild West ghost stories then read up on the ghosts of the outlaws of West Texas. You can also learn about the top ten most haunted spots in San Antonio right here!