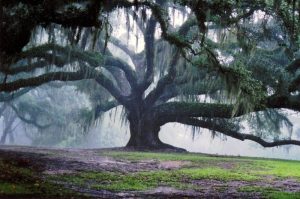 Lynching, suicide, hanging, tarring, even staking, trees seem to have slowly become an essential gimmick in horror stories. There’s a mystic to them and, well, let’s be honest as humans we’ve used those suckers for just about every unholy scheme we could dream of.

We’ve burned witches on them, tarred and feather outlaws bound to their trunks, lynched slaves, and hung pirates. Some mighty oaks in the States have a greater body count than Old Sparky from Georgia State Prison.

During the Reconstruction Era in the South, there were certain oaks that simply attracted mob violence at least once a week. Section of the deep South that made extrajudicial killings scheduled events.

“The only good man is a dead man swinging.”

The hanging trees of San Antonio.

San Antonio, like any good military town, has had a few hanging trees. Stout sticks strategically placed around the placed itching for a good body… Netflix wasn’t a thing and people needed a way to kill time.

One of the most famous is the “Tree of Sorrows” in the Old Captain’s Presidio. Sources claim that no less than 37 souls were hanged by the noose during the late 17th century. If you peer carefully enough, the nicks, cuts, and scrapes of the hangman’s rope can still be seen on some of the branches. 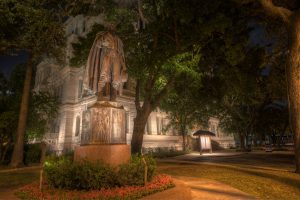 “The presidio (fort) of Bexar was relocated here in 1722 and for many years, the plaza was enclosed on three sides by adobe fortifications. During the Mexican Rebellion of 1813, captured rebels were placed in comandancia (now old Governor’s Palace) and later executed on the plaza. Many lynchings also occurred at a great oak here.”

Those are just some of the hanging trees associated with San Antonio. Some are just fanciful tales that serve as a catalyst for storytellers and ghost enthusiasts, while others actually existed… Nonetheless, as you can see, San Antonio has quite a past with blood-hungry saplings. They are everywhere in the city. This was once the picture-perfect wild west town, brimming with saloons, lowlifes and smugglers – think Mos Eisley cantina, and Han always shot first.

San Antonio was the sort of town where the sheriff read you your rights while you were bleeding from several gunshot wounds, his guns smoking. It was the sort of place where you’re corpse got a fair trial only after it had hung for a week or two in the middle of the square.

Every brothel, haberdashery, saloon, and plaza had a hanging tree… AND, since suicide by overdose wasn’t a fad’ yet, some of these trees started to attract the desperate and depressed. They started pulling double duty, becoming SUICIDE OAKS.

One of the most iconic SUICIDE OAKS in San Antonio was once located on the corner of Patterson Avenue and Torcido Drive in Alamo Heights. It’s since been plowed down and shipped off to God knows where – luckily burned.

The tree’s mythical name derives from the rather insidious legend that surrounds it. Locals used to know it as the hanging tree – the visage of it, in the middle of a winding road stirring nightmares in all the natives. It wasn’t your average hanging tree, not in the sense of rough justice, but something far more sinister.

In order to really get the whole story of this legendary tree, we have to hop in our time machine and go all the way to the start of San Antonio’s Industrial Revolution. The city was expanding outward and folk needed a quick way to herd people from one end to the other. Carts and horses weren’t really cutting it.

One of San Antonio’s first and less successful ventures in public transports was the original Alamo Heights Street Railway Co. It was a pioneer trolley route that went belly up almost right out of the gate.

“It started out with mules, went electric, and then went bankrupt. The whole company had to consolidate and be absorbed by other city lines.”

The first mention of the SUICIDE OAK comes from the San Antonio Light – a newspaper of the area – on September 3, 1911.
“A live oak topping the hill on the west side of the streetcar loop in Alamo Heights.”
The streetcar company starts to use the tree and the locale, thanks to that newspaper piece, as a way to advertise their services. They built a bivouac station around the oak and overtime it became one of their most-visited spots. It became an icon of the area – so much so that when a windstorm took the tree down in 1941, the oak received a one-page obituary in the local paper.

But why SUICIDE OAK?

Well, what few people actually knew about the tree was the fact that during a period in the region, when the west was being conquered, the oak was a stable for frontier justice. An outlaw was caught stealing by locals? Hung on the tree. Natives went on a rampage? Hung on the tree. Marshalls pursued those same natives? Hung on the tree. African American looked kind of sketchy? Hung on the tree. The Nicols boy was being a pest? Hung on the tree. Grandma was outliving her stay? Hung on the tree.
The tree, during a time, became the catch-all way to get rid of pesky little problems. It became the go-to solution for most hiccups in the community.
“You know the drill, just hand it on the tree.”
Anyway, the tree had a reputation. While the streetcar company was exploiting it, the old-timers in the area were scratching their noggins’ and wondering what was the marketing endgame.
“Jim? Are them fella’s nuts?… Ain that where you hung your wife for infidelity?”

The Trees’ Most Famous Story.

In the height of the streetcar’s fame, the story goes, a girl hung herself from the branches of the tall oak. The young girl had just gotten into a heated fight with her boyfriend, a motorman of the Alamo Heights Streetcar Line, and it seemed that the relationship was kaput. At midnight, desperate and alone, she crawled to the top of the hill, tossed a rope over one of the branches and jumped off a chair with a noose hanging around her neck. It was a poor man’s noose and it ended up choking her; her spine didn’t snap on account of the fall.
The next day, when her ex drove up on his daily route, he found her withered body dangling from one of the branches. Less than a week later, he came up to the spot and swung by the neck from the very limb.

It is said that her haunting figure scours the landscape, inciting violence and suicidal thoughts. The ghost swaying weak minds to take their lives.

“He found her body dangling in a noose from the tree on his first trip the following morning. Sundry other blighted lovers took their lives by a variety of means under the same branch.”

People who visit the place where the oak once stood are said to experience great melancholy and even thoughts of suicide. On certain nights paranormal investigator swears they can hear the branches of a tree that no longer exist and the sound of rope swaying in the wind. 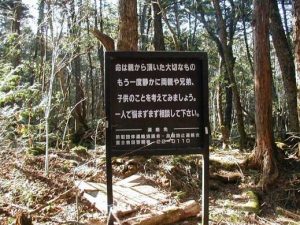 “I once went to Aokigahara near Mount Fuji in Japan – the suicide forest. The place is really eerie. There are signs everywhere encouraging people to seek help and others with phone numbers in case you discover a body. The place is the number one spot in Japan for suicides. There’s this overall feeling of dread and soul-sucking evil in the place. Like everything that’s good about the world is suddenly snuffed out the minute you enter the blighted spot. Well, the area where that horrible oak once stood in San Antonio feels exactly the same. It’s cold, abysmal and you feel like something is scratching at your sanity wanting to get in and make you doubt everything.”