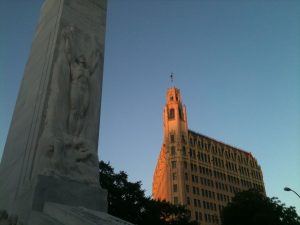 The Emily Morgan Hotel was built to be haunted. The historic building is thirteen stories tall, built in the spooky gothic-revivalist style, and sits right across the street from the Alamo. The hotel was once a state-of-the-art medical facility with its own morgue and crematorium. The designers were nice enough to carve creepy gargoyles onto the building’s exterior, each of which represents a different ailment. The Emily Morgan Hotel was named after folk heroine Emily West, who seduced Mexican General Santa Anna during the Battle of San Jacinto. Thanks to her efforts, which may have been accidental, the Texans beat the Mexican Army in just 18 minutes. The Emily Morgan is one of the top 3 most haunted hotels in America, and there’s a good reason why. Strange occurrences constantly plague staff and guests; lights switching on and off, feeling strange sensations, ghosts brushing up against you, the shenanigans go on and on. The basement, once home to the morgue, is incredibly haunted. Staff have seen glowing orbs floating around, and the smell of burnt human flesh still permeates the walls.

The Battle of the Alamo

The Emily Morgan Hotel sits only a few hundred meters from the Alamo. As a matter of fact, the Emily Morgan is touted as the “Official Hotel of the Alamo” and is part of the Alamo Plaza Historic District. The Alamo is, of course, much older, and when the infamous battle occurred at the historic missionary and fortress in 1836, hundreds of people died.

Taking place only 88 years before the Emily Morgan was built, the grounds were already soaked in blood. Though most of the ghosts in the Emily Morgan are tied to its days as a medical facility, one cannot doubt that many of the spooky happenings in the hotel may be from the lost souls who died during the Battle of the Alamo.

Long after the dust settled from the bloody Texas Revolution, San Antonio was expanding and drawing in new residents and businesses. Considered one of the four most unique cities in America at the time, the town was all the rage among early 20th century developers. Before plans for a new building across from the Alamo were drawn up, the site was a marble rock quarry for other new developments around the city.

In 1924, builder J.M. Nix and architect Ralph Cameron came up with a plan to build the city’s first Medical Arts Building. At this state-of-the-art medical facility, the best doctors and surgeons would be able to practice their specialties. Not only would it become the best medical facility west of the Mississippi, but the first skyscraper too.

The building’s interesting triangular shape was meant to mimic the Flatiron Building in New York. The gothic-revivalist architecture and terracotta finish made it an architectural wonder. The designers etched gargoyles all over the building’s exterior, each one suffering a different ailment. Some have tummy aches, others have a headache, and another has a poked eye.

The new Medical Arts Building was able to accommodate hundreds of doctors and physicians. Surgeries were conducted on the top floors. The morgue and crematorium were in the basement. The building was one of the country’s best hospitals for decades, and was in operation until 1976 when it became an office building.

After ten years as an office building in Downtown San Antonio, the building was gutted and remodeled as a hotel. The Emily Morgan was added to the National Register of Historic Places in 1977 as part of the Alamo Plaza Historic District. The hotel opened officially in 1984, but it wasn’t until 2012 that it became what it is today. The Double Tree-Hilton conglomerate bought the hotel and poured millions of dollars into its renovation, making the Emily Morgan a five-star destination. The hotel became the “Official Hotel of the Alamo.”

The hotel boasts 177 rooms and 24 suites, including a luxurious 14th-floor suite with a bubbling champagne hot tub that overlooks the city. The Emily Morgan advertises its ghostly residents, encouraging guests to report and record any possible ghost sightings or unusual events. The hotel attracts numerous ghost hunters and paranormal experts looking for their big break.

Being the premier hotel in San Antonio, it’s wrong to go off not knowing who gave the building its namesake. The hotel was named after one of the Lone Star State’s folk heroines, Emily West. Born a free woman of color in New Haven, Connecticut, Emily came down to Texas to complete her time as an indentured servant, as many mixed-race freedmen were obligated to do. She worked for James Morgan, who many erroneously believed her to be either enslaved or married to Morgan, hence how she posthumously received his last name. Emily worked as a housekeeper at the New Washington Association Hotel at Morgan’s Point, near present-day Houston, for $100 a year.

Unfortunately for Emily West, she wouldn’t be working for long. She and her colleagues were kidnapped and taken hostage by Mexican General Antonio Lopez de Santa Anna, the same general who took the Alamo just a few months earlier. Emily was taken hostage along with other Black servants and workers, and a few white residents were taken as well. The group was taken down to Buffalo Bayou, where Santa Anna was to take on Sam Houston’s army.

The day the Mexican cavalrymen were set to go up against the Texans, Emily West had happened to be called into General Santa Anna’s tent. Whether Emily knowingly seduced the General or had happened to entertain him was unknown at just the right time. The Battle of San Jacinto was the decisive conflict of the Texas Revolution, and the commanding general was caught off guard because Emily West was half naked in his tent. The Mexican Army was defeated in 18 minutes.

Emily found refuge with artillery officer Issac Mooreland, who granted her passage across the country back to New York. She had lost her freedman papers, and traveling the countryside without it would be a dangerous endeavor. Though Emily did not distract General Santa Anna by choice, her actions are still celebrated. Now known as the “Yellow Rose of Texas,” Emily West, or Emily Morgan as she’s often called, is a prominent part of Texas history.

Ghosts of the Emily Morgan Hotel

Among the top 3 most haunted hotels in the country, the Emily Morgan is a paranormal hotspot. From the Battle of the Alamo to the days as a medical facility, the hotel has seen its fair share of death and bloodshed. In order from top to bottom, the most haunted floors are the basement, 7th floor, 12th floor, and 14th floor. Visitors and guests report having ghosts brush against them, lights turning on and off on their own, and the apparitions of nurses walking up and down the hallways. Floating orbs of light are also familiar here, and they’ve even been captured on the hotel security cameras.

The basement housed the crematorium and the morgue, so it’s easily the building’s creepiest part. Hundreds of bodies were cremated over the medical facility’s life, meaning that there are definitely some restless spirits still lingering. Only employees can enter the basement, and most who have the unfortunate pleasure of having a task in the basement dread going there. Staff report seeing glowing orbs floating around and hearing disembodied voices, some yelling in pain. The worst part is the smell of burnt flesh mixed with the thick and humid air, which makes most people who go down to the basement nauseous upon entry.

The 7th Floor and the Ghost Bride

Some say the 7th floor is the most haunted floor in the building, and those looking for a thrill are encouraged to book a room there. Numerous guests and staff have seen the ghost of a bride, though nobody knows what her connection to the hotel might be or why she seems stuck on the 7th floor. What they do know is that she’s terrifying enough to send guests flying to the lobby in the middle of the night. Guests might be woken up to a bloodcurdling scream at 3 AM. Others have seen her apparition appear in their rooms at random and disappear through the walls, off to scare other guests. Worst of all is when a guest is looking in the mirror and sees her reflection, only to turn around and see nothing there.

The 12th floor was where the Medical Arts building’s operating rooms were located, and now houses Emily Morgan’s swimming pool. It’s rumored that the pool was constructed using stainless steel from the operating tables. Whether or not there is truth to the rumor, the 12th floor is where many of the unusual shenanigans take place. Guests will often hear hospital stretchers being moved up and down the hallway at night, and it’s often that guests see the apparitions of nurses and doctors, still doing their jobs as if the hospital never closed. Guests also report lights and bathroom faucets turning on and off on their own. Some have even seen their doors open and close randomly as if a phantom walked into their room.

The 14th floor is actually the Emily Morgan Hotel’s 13th and final floor, but like most skyscrapers, the building officially doesn’t recognize the 13th floor to avoid “bad luck.” That move didn’t spare the 14th floor of the Emily Morgan; it’s still very much haunted. The hospital’s smell still lingers around the top floor, which is home to the most luxurious suites. Guests say they smell the odor of medicine and ointment, which makes sense, considering that this was one of the Medical Arts Building’s surgical areas. Some guests claim that they see scenes from the old hospital out of the corner of their eye, only to vanish when they glance over.

Learn about the haunted history of San Antonio!

San Antonio is a melting pot of Native American, Mexican, and American cultures, and one of America’s oldest and most unique cities. The long history and clash of civilizations give the city a spooky vibe. The Alamo Mission is host to several creepy ghosts leftover from numerous battles, namely the Battle of the Alamo, where nearly 800 lost their lives. Just outside of town in the Rio Frio Valley, the White Lady of Rio Frio keeps watch over the valley’s lost children. If you take a turn towards Skinwalker Ranch, you might encounter a Skinwalker, a shape-shifting demon from Native American folklore. Be sure to read up on the top ten most haunted spots in San Antonio before planning your next trip to River City!