The Hauntings at SouthTown 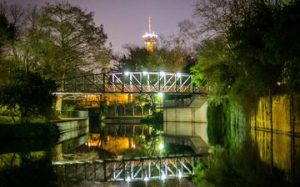 Why Is SouthTown so haunted?

SouthTown is the end result of a mad dash rush by high-rise entrepreneurs trying make a killing. A million little investment firms gobbling up cheap real-estate, flipping it and making a killing in gentrifying MORDOR. This is what happens when Randy Marsh gets a bee up his bonnet for a “Whole Foods”. Kenny McCormick wakes up one crisp autumn morning, looks out his window and discovers that his property taxes have just doubled.

SouthTown, San Antonio is the sort of grand dame of the ball that simply couldn’t keep her champagne down. Things started out just fine, perfect to be exact, then one gateway drug later and she’s spiraling down a kaleidoscopic rabbit’s hole – rails of cocaine, bags of meth, low-end Thunderbird – a couple of blackouts later, her dress put on backward and a tramp stamp on her High-Class keister and she’s in rehab having found the Lord. SouthTown is that wayward lady, holding fast to her 10-year chip and doing the 12 steps like her immortal soul depends on it… Yes, there’s temptation behind every corner. Yes, she’s fallen off the wagon about a dozen times. Yes, she’s one economic downturn from turning trick at a corner. Yes, she’s packing heat cause’ most pigs have it in for her. Yes, her reputation precedes her and most crack dealers now her by name… BUT, by God, she’s making a go of it!

During a period of San Antonio’s history, this little outskirt of a place was comparable to certain places in Sarajevo during the late ’80s. It was a battle scar playground with its own brand of Somalian pirates and roaming bands of cannibals fighting a never-ending turf-war for locations. You came to SouthTown at your own risk and knowing that the CDC was spitballing ideas on how to implement a check-point on certain frontiers.

As you can imagine, such a place breeds ghosts faster than a WWII battlefield. SouthTown has all the right ingredients needed for a Stephen King novel. History? CHECK! Murder and mayhem? CHECK! Old stuff? CHECK! Mysteries abound? CHECK! Urban legends? CHECK! A couple of ghost tours trying to cash in on the fact that Elder Gods seem to like the local culinary options, Cthulhu loves his back bean fajitas? DOUBLE CHECK!

The word SouthTown has become the catch-all, umbrella term for everything that goes bump in the night. It is a couple of blocks brimming with haunted places and dens of spirit. Each house makes Derry look tame by comparison… If Pennywise were to come to SouthTown he’d probably get run off by ectoplasmic apex predators:

“You albino, MOFU… Don’t you come around here with that Winnie the Pooh voice… This here is for professionals, not two-bit acts that can’t even handle a couple of losers on bikes… Get!”

A Guide to Southtown’s Devils and Goblins.

The Old Methodist Church, which sits on South Alamo Street, was built in the early 1900s. Over the decades it has switched patrons, owners and reason for being. It’s juggled all kinds of hats, from its original – as a place of worship – to a bawdy theater.

As the deed was traded from one hadn’t to the other, there were gaps between one deal closure and the next, during those gaps, the church became a refugee camp for the dregs of society. This was the spot in the early ’60s where high-end Mercedes Benz made pitstops, picked up a little “relaxation” before going home to the suburbs.

In the early ’70s, the place had already been a theatre, a restaurant, a church, an event center and a mush pit for pimps and street hustlers.

Throughout the years rumors started to emerge of spirits and ghosts using the church grounds as their nightly Burning Man celebration.

An investigation performed by the local paranormal society and bankrolled by KSAT 12 – an San Antonio news station – only served to enforce the rumors and quite possibly feed the neighbor’s nightmares. While the ghost-hunters of San Antonio Paranormal Investigators were there, the savvy spooks kept a low profile; none actually showed up and shook their would-be hunter’s hands…. when the team flew the coop for the night but left a bundle of surveillance equipment set up, the haunts decided to have a free-for-all. 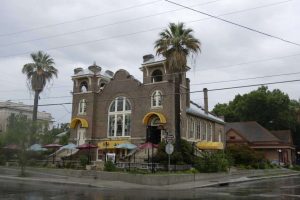 The proverbial hot dog joint with a twist. Frank was nothing more than a hole in the wall hot-dog place that served great ballpark Franks with cold Buds. When the area started to bring in the crowds and the hipsters descended like locust on SouthTown, Frank’s decided that his one step above street cart schtick needed to evolve. He spruced up the place, introduced a cocktail menu and decided to stick around to cash in on the new trend.

The place was known for its custom sausages, its beer on tap, its happy hour specials and its ghosts.

Originally built in 1912, the restaurant shared sleeping quarters with the Old Methodist Church. It became a revolving door of sort for the ghosts that haunt the SouthTown district. If you’re a world-weary spirit, with the trials of scaring the bejesus out of mortals riding your back, then what better place to take the load off than Franks?

There’s the ghost of a theater actress, that late one night decided to mix too many of her pills with too many of her martinis. The permanently boozed-up specter waltzing around Frank’s trying to get her nightly fix of alcoholic sleeping aid, brushing against fit sexy hunks – whispering her siren wail into their ears – and then leaving before the morning screeches in. The wraith is known for her coquettish attitude towards the XY of the sexes, although she sometimes likes to pinch a skirt-wearing behind or two, the fact that whenever you feel her presence there’s a reek of booze and cigaret smoke, and finally because when she makes a grand exit, she generally leaves a cloud of smoke in her wake.

Then there’s’ Eddie. Eddie is a by the numbers poltergeist that likes to cause mischief and mayhem simply because he has nothing better to do. Eddie seems to be a stable of the SouthTown area, the rambunctious little sprite – no one really knows its origin – wrecking all kind of havoc on the streets and venues in the area.

“We even have cocktails named after them. Our way of showing appreciation for their patronage. You have to be a good neighbor that’s the key to living with ghosts… Particularly Eddie. If you don’t give Eddie respects he throws a temper tantrum and messes up our basement.”

Sadly, if you want to get a gander of Frank, you’ll have to wait, as of December 2019 the place – once more – is trading hands and deeds are being passed off.

But it’s not only Frank or the Methodist church that has its fair share of ghouls, nope. Other places in the area seem infected by the supernatural.

The Getting House Museum, with orbs and will-o-the wisps hanging around windows at night. People swearing the hear the lamentations of a small girl by the front door.

The running trail that spans part of the San Antonio Riverside just off the South Alamo Street crossing. Joggers and midnight casanovas with that day’s conquest caught transfixed, staring out at the river bank as something starts to crawl from the murky depth towards them. The river was once used as a great way to dispose of bodies; moving walkways that would disgorge any evidence of wrongdoing further down the stream.

SouthTown is gritty, bloody and vile… with a fresh coat of paint and a thumbs up by the modern generation.