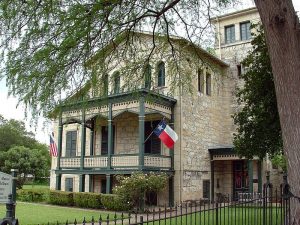 San Antonio’s Southtown is where the artists and cool kids hang out. And while the neighborhood is already known to be haunted, one area, in particular, has an unusually high concentration of haunted houses. The historic King William district. Lined with Victorian-era houses, King William has been named one of the most beautiful neighborhoods in the country, and one of the most haunted. The history of the King William district dates back to the 1800s, when well-off German immigrants began moving in. These immigrants began building businesses and factories. They prospered and used their spoils to build elegant Victorian mansions. The area was soon named King William, after King Wilhelm I of Prussia, but locals simply called it Sauerkraut Bend. The Germans weren’t welcome in the area, and we’re pushed out in droves during World War II. The area is still well preserved, though it’s now known as a haunted hotspot. They say ghosts have been seen in the area since the days it was just farmland. The district sits right on the San Antonio River, and since experts say that ghosts can’t cross over water, those same ghosts are said to still roam the neighborhood, trapped by the confines of the river. The Gatlin Gasthaus is a well-known haunted bed and breakfast in the district. In the past, every time a couple bought the house, the husband would die a short while after. Guests report all sorts of strange paranormal experiences, such as their furniture violently shaking for no reason. The Oge House, another bed and breakfast, is home to the friendly spirit of Ms. Oge. Her bedroom was where the kitchen is today, and she often appears to guests who spend a little too much time preparing their meal. The Old Fire Museum hosts a collection of equipment from the San Antonio Fire Department, and the ghost of a woman in a white dress haunts the building. The Old Methodist Church, which became a theatre, then a hotdog stand, is home to the ghosts of Little Eddie and Miss Margaret.

History of the King William District

Back in the 1700s, the area south of San Antonio de Bexar around the river was owned by the Alamo Mission. At the time it was just farmland. The Alamo secularized in 1793, and began to divide the land between Native American families in the area, while some of the plots were auctioned off to the public. In the mid-1800s, the land was divided even more as the current street grid was laid out across the city. It was around this time that German immigrants began to flock to Texas, many of them settling in San Antonio. The enterprising immigrants began snatching up the land just south of downtown. They started businesses and opened factories, and their success brought them great wealth. They began building huge mansions on their land, using elegant architectural styles. Greek revivalist, Victorian, Queen Anne, and Italianate-style houses adorned the streets in the neighborhood. The main street in the neighborhood became known as King William Street, in honor of King Wilhelm I, the King of Prussia. San Antonio locals weren’t very welcoming to the Germans. They nicknamed the area Sauerkraut Bend.

World War I came around, and America was at war with Germany. For the time being, King William Street was renamed Pershing Avenue, after US Army General John J. Pershing. After the war, the original name was restored. The anti-German sentiment came to a peak during World War II, and the discrimination was so strong that the German population was pushed out of the now idyllic neighborhood. The neighborhood fell into disrepair as the houses were abandoned. The combination of classical architecture and abandoned homes began to give the district a haunted reputation.

The neighborhood was saved by a revitalization movement in the 50s, and many of the buildings were bought and used as inns and B&Bs. The King William district became the first historic district in San Antonio in 1972.

The house on 123 Cedar Street was built in 1903. After her husband’s death, current owner Betty Gatlin turned the house into a Gasthaus, the German version of a bed & breakfast. It didn’t take too long for Betty to uncover some of the strange hauntings at 123 Cedar. She found out that many of the previous owners also lost their husbands shortly after moving in, a strange coincidence indeed. Betty and her guests often experience paranormal events, which have become a normality in the Gatlin Gasthaus. Furniture and beds shaking violently at night, strong gusts of wind randomly blowing doors open, and lights flickering on and off are all common occurrences at the Gatlin Gasthaus.

Another bed and breakfast in King William is the Oge House. Built in the mid-1800s, the Oge House was one of the first mansions in the district. The house has stood strong through heavy storms, flooding, and fires. While the home was under renovation in the 90s, then owner Sherri Magatagen began feeling a strange presence. She often saw unusual shadows against the walls and things moving from the corner of her eye. The ghosts seemed to hang out near the kitchen, and upon further investigation, Sherri discovered that the house once belonged to a widow named Ms. Oge, who died in the bedroom of the house. The thing is, what is now the kitchen was once Ms. Oge’s bedroom, which is why the kitchen seems so haunted. Sherri, a chef, often recalls times when ingredients go missing while she’s preparing a meal. The ghost of a ten year old girl who drowned in the San Antonio River is also found in the house, as is the ghost of a gentleman who’s particularly fond of the Oge House’s Mathis Room. None of the ghosts seems to wish harm on the living, and so Sheri has learned to live with her ghostly residents.

The property on 1150 South Alamo is the most haunted house in King William. Originally known as the Old Methodist Church, the building was built in 1912, and conducted services until the 70s, when church attendance fell dramatically. The building was then sold and became the Alamo Street Restaurant & Theatre. It became a historic landmark in 1979.

The first ghost to arrive was Little Eddie. The boy arrived when several props were donated to the theatre, including his wheelchair. Eddie had died a few decades earlier from Polio, and as it turned out, he really enjoyed his new life at the theatre. He was free to run around and frolic, no longer confined to his wheelchair. The next ghost to arrive was Margaret Gething, also known as Miss Margaret. A socialite from New York, Miss Margaret performed in numerous Broadway plays and often hung out at the theatre when she lived in San Antonio. After her death, she continued hanging out in the theatre, and a lucky patron was able to capture her ghost in a Polaroid picture.

The theatre later became a hotdog spot called Frank, and the ghosts still inhabited the building. Little Eddie was often blamed for missing hotdogs and was known for playing tricks on the patrons, while Miss Margaret would snobbishly judge their food choices. Unfortunately, Frank closed in 2018, but the ghosts of Little Eddie and Miss Margaret are sure to still be there.

Other Haunted Houses in King William

The Fire Museum, once Fire Station #7, showcases old equipment once used by the San Antonio Fire Department. Among the old renovated trucks and used uniforms, lies a photo of the firefighters of Station 7. Among the firefighters is a mysterious woman in a white dress. Nobody knows who the woman is, but her ghost has been seen around the Fire Museum on multiple occasions. Some say she was the widow of a fireman who died while on duty.

The Wuff House was built in 1870, and was always thought to be haunted. Sometime during the 1970s, it became a funeral home, adding to its mysterious reputation. The Wuff House is often used as a starting point for ghost tours of King William.

Learn about the haunted history of San Antonio!

San Antonio is one of the oldest cities in the Southwest. It’s also a cultural melting pot, where Native American, Mexican, Texan, and American cultures meet. Its unique and bloody history has kept many restless spirits alive. The Alamo is a must-see historic landmark, where nearly 800 people were killed in the Battle of the Alamo. The spirits of those slaughtered still haven’t left. Right across the street is the Emily Morgan Hotel. Once a state-of-the-art hospital, the hotel contains the memories of those who died in surgery and the spirits of the bodies burned in the morgue. If that wasn’t enough, the building has creepy gargoyles sculpted all around the exterior. Not far from the city lies the Rio Frio Valley, home to the ghost of Maria Jimenez. After she was killed her jealous brother-in-law, Maria began roaming the Rio Frio Valley, bringing comfort to lost and scared children. You should also check out the top ten most haunted spots in San Antonio right here!