The White Lady of Rio Frio 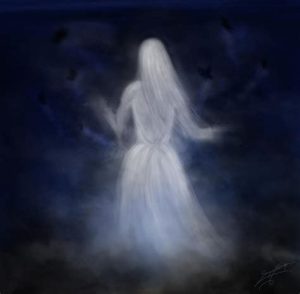 The Frio River Valley is known for its cool weather and natural beauty. It’s also home to the ghost of Maria Jimenez, known to the locals as the White Lady of Rio Frio. In the early 1900s, Maria Jimenez lived with her sister and brother-in-law on their ranch, looking after her nieces and nephews as if they were her own children. As Maria grew into a beautiful woman, she caught the eye of Gregorio, her brother-in-law, who then professed his love to her. When Maria didn’t reciprocate his advances, he shot her dead on the Rio Frio banks. Having died without fulfilling her dream of raising children, the restless ghost of Maria Jimenez is still said to roam around the Rio Frio canyon, comforting the town’s children and helping lost souls cross the river. Many see her dressed in white for the gown that she wore at her funeral procession, leading to her being named the White Lady of Rio Frio. She also tends to appear on foggy nights, covered by the cloudy mist that hovers over the river. Many hear her comforting whispers when they see her ghost. Others feel a strange sense of peace and tranquility. Just as she was in life, the White Lady of Rio Frio is known for being a watchful and nurturing spirit.

The Life of Maria Jimenez

Maria Jimenez was always attached to her older sister, as young girls usually are. When her sister got married to a vaquero named Gregorio, Maria went to live with them. The three lived happily on the ranch, and Maria spent her time watching and caring for her nieces and nephews, longing for the day when she could get married and have children of her own.

As Maria grew up, she blossomed into a beautiful woman, and the Jimenez sisters became known as the two most beautiful women in town. While visiting a nearby ranch with her family, Maria fell for one of the ranch hands, a vaquero named Anselmo Tobar. Anselmo courted Maria, always bringing her a bouquet of wildflowers, and the two spoke about love and marriage. Maria would still sneak out at night to meet Anselmo at the banks of the Rio Frio, which became their secret meeting spot. She knew the day that Anselmo proposed wasn’t too far off. Maria, who longed for a family and children of her own, was realizing that her dreams may soon come true.

Maria’s beauty caught the eye of her brother-in-law, Gregorio. Despite being married to her sister, he became smitten with Maria. As time went on Gregorio fell in love and became passionately obsessed. He couldn’t hold back any longer. Gregorio had to profess his love to Maria.

On a warm afternoon, Maria went to the banks of the Rio Frio to meet Anselmo at their usual meeting spot. She instead arrived to find Gregorio. He confessed to Maria that he was in love with her. Maria scoffed at him, explaining to Gregorio that she was in love with Anselmo and planned to marry him. Gregorio became enraged and began yelling at cursing at Maria. Fearing for her safety as well as that of her older sister, she ran home as Gregorio continued yelling in a fit of anger. When Maria arrived at her home, she patiently awaited the arrival of Anselmo, hoping to tell him of what had just occurred.

Later that evening, Maria heard a noise outside. Hoping to find Anselmo, she ran through the front door, only to find Gregorio standing there with a loaded revolver. She screamed in terror, and Gregorio shot her dead in the chest. If he couldn’t have her, then nobody can. Realizing what he had done, Gregorio ran and went into hiding.

It didn’t take long for the whole town to find out about Maria’s murder. Maria’s sister was devastated, and Anselmo was heartbroken. The entire town was mourning the loss of one of the beautiful Jimenez sisters. Nobody had yet suspected Gregorio to be the killer.

The next day, the women in the town adorned Maria’s body with her sister’s white wedding dress, preparing her for her funeral. They braided her hair with ribbons and wildflowers. The men got together and began a search party, hoping to bring the murderer to justice. They had a few dogs in the party, who led them to a barn at the edge of town. They knew that whoever was in the barn had to be the killer. As the search party carefully opened the front doors, a frightened Gregorio stepped out from behind a stack of hay, legs trembling and his hands held high in the air.

The town was shocked to find that Gregorio was the one who shot and killed Maria. He confessed to the murder while professing his love for her. He was sent to trial, convicted, and put in prison.

Maria’s dreams died that day. She would never get married. She will never have children of her own. Her sister lost her two best friends. Anselmo later got married to another woman, who bore the children that Maria longed for. Maria Jimenez is buried at the Rio Frio cemetery in an unmarked grave.

The White Lady of Rio Frio

The sadness and tragic ending to Maria’s life caused her soul to remain restless. Her spirit wanders around the Rio Frio valley, still wearing her sister’s white wedding dress. Maria was a caring and nurturing soul while alive and remains so in the afterlife.

The White Lady of Rio Frio is known to look after scared or lost children and has been said to guide them back home. Many children around the Rio Frio valley have woken up to Maria standing over their bed or sitting in their room, watching and guarding them. She also cloaks children who are cold or scared, comforting them and protecting them from harm. All Maria wanted in life was to have a family, and since her dream was never realized, she lives out her fantasies by caring for the children of her hometown.

Many have seen Maria while on the banks of the Rio Frio. The cool temperatures of the valley often bring a hazy fog to the river. They say that her apparition appears within the fog on a cool night. She hovers over the water and moves with the fog, with her long white dress trailing gracefully behind her. Those who see her apparition on the river usually feel a sense of calmness overcome them as they hear her comforting voice whispering in their ear. The riverbank was her meeting spot with Anselmo, so it’s probable that her spirit would appear there as she patiently waits for her lover to return.

Others have had experiences where they were saved from falling into the river, believed to have been saved by Maria. While the Rio Frio is quite shallow, in many places, it gets pretty deep. A few townsfolk have claimed that Maria has saved them from drowning, or falling onto jagged rocks, by guiding them across the river or catching them before they fall. One man says that he felt a hand grab his T-shirt when he almost slipped on a moss-covered rock and was pulled back to safety by the invisible hand. He previously paid no mind to the legend of the White Lady but has since become a believer.

While some doubt that Maria’s spirit still wanders the canyon, others swear by it. Those that do believe, though, all say the same thing. The White Lady of Rio Frio is the kindest spirit that you will ever meet.

Learn more about the haunted history of San Antonio!

One of the oldest cities in America, San Antonio’s history stems from its days as a trading post for the Spanish Empire. And wherever you find history, you also find ghosts! Read about the Alamo and the spirits of Native Americans and Texan soldiers that haunt the old chapel. Pay a visit to the Ghost Tracks of San Antonio, where a terrible accident took the lives of 23 children, whose spirits still roam along the train tracks. Try not to get eaten by the Skinwalker along the way! These creatures from Native American folklore look like giant lizards that are known to shapeshift. You can also read about the top ten most haunted spots in San Antonio right here!