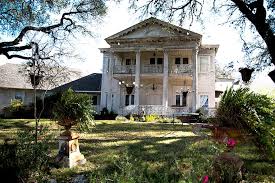 Where do I begin? The truth is that this place might as well be studied as a whole course in any would-be parapsychology class. The Victoria Black Swan Inn is steeped in tradition, lore, and romantic mythology. It is a treasure trove of tales and urbane stories that have some of San Antonio’s most prestigious personages as protagonists. This two-story Greek Revival-style plantation house, overlooking the Salado Creek, on top of its grassy knoll throne could very-well turn heads if it could talk. It’s full of gossip, of skeletons, and more importantly of spectral inhabitants that simply don’t want to give up the ghost.

A Chronology Of The Ectoplasmic Field.

Way before the idea of the United States bubbled into our forefathers’ brain, wayyyyy before said forefathers were even genetic samples in their linage’s loins, the area where the Victoria Swan Inn sits atop was the site of a Native American encampment. For more than 1500 years the region was a power basin for a rather prestigious post-agricultural revolution band of natives. 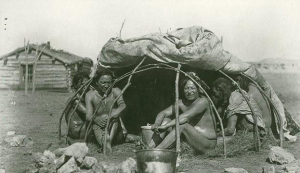 Archeologists sweeping the fields and kicking over the proverbial stones have discovered signs not only of habitation and communal houses but of sweat lodges and ritual altars. But, and here comes the kicker, the one true post sign of a future supernatural infestation… an actual ancient Indian burial ground is thought to exist under the grand and stately plantation house.

We’ll get back to the consequences of this aboriginal origin a bit further down when the spirits and goblins start doing their march into this piece, meanwhile, let’s stick to the incredibly bizarre and oftentimes blood-drenched history of this spot.

For a couple of eons, the place remained intact. The Natives vanished long before European settlers marched across the Texan plains.

We don’t really know what happened to the band that called this place their own. They could have simply migrated someplace else or some sort of disease or malady could have struck them. There is also the prevailing theory that a turf war – something quite common in the less than peaceful valleys of pre-colonial US – could be the culprit for the mass disappearance. Genocide, in that era, despite what some people claim, was not an Imperialistic invention, but a mode of conquest that was a widespread practice among all nations.

The Battle Of Salado Creek.

On January 9th, 1842, a statement from General Mariano Arista in Monterrey made Texas facepalm itself and go: “not this again.”

The word, as if plucked from the Old Testament was simple:

“Mexico is going to retake Texas. If you join us you will be given amnesty if you resist then may God sort you out.”

In August 1842, The Mexican army crossed the border and invaded Texas.

The Mexicans, lead by French-Mexican commander General Adrián Woll, toppled over 1600. They had on their side not only superior men power, heavy artillery but 200 Cherokee scouts. In numbers, they were far superior and better trained than the assembly of men Texas was trying to cook up.

While Woll marched on, Texas was on fire. The alarm was raised and the Texians were trying to cobble together a militia to fight Woll’s blitzkrieg. Colonel Mathew Caldwell, a veteran of the Texas Revolution, a POW of Mexico that had just been released from one of their dreadful prisons was given the task of expelling Woll’s troops. Altogether, he managed to ring into his suicide mission about 220 fighters. 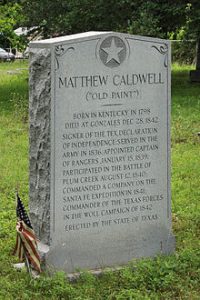 Caldwell thought he had a snowball chance in hell of actually scoring a victory, at most – against such unsurmountable numbers – all he could do was give the Mexican’s a black-eye and maybe give the Republic a few hours to round up reinforcements.

The plan was simple, he’d send 38 men on horseback – on the only 38 horses were fit for duty – and somehow lure the contingency of Mexican into a chokepoint along the Salado Creek prairie. The hope was, that at best, 50 men would follow the brave 38. Instead, 200 Mexicans and 40 Cherokees were sent after the 38… and, like overkill, Woll followed that spearpoint personally commanding a legion of 300.

And that’s when a series of mistakes started to dwindle Mexican superiority. A cluster of skirmishes followed the frontal attack. Caldwell ambushed the overconfident Mexican flanks. Snipers harassed the Mexican cavalrymen. Guerilla tactics were employed and hundreds of Mexican troops started dropping like flies. Over 1000 Mexicans were assembled across the field, and due to an error of calculation, their volleys of muskets and cannon fire never even reached Caldwell’s line.

After almost 2 days, the Mexican’s had no choice but to retreat. They were being massacred and, more importantly, they had overextended their supplies.

Woll went back across the borders, and only one Texan – Steven Jett – lost his life. Caldwell on September 18, 1842, made a killing field out of the soil where the Victoria Swan Inn now stands.

In 1867, the historic hotel – named after Shakespeare’s favorite pub – was built. It has since traded hands and been renamed and rebuilt – particularly after the arson strike of 1901 when the house burned down – numerous times. And, each dweller has is said to haunt the old spooky Inn.

There are too many to properly do each and everyone justice, so I’m just going to enumerate them and hope that’s enough to scare up some nightmares. Just so you get an idea, this is one of the few spots on the planet with actual Google reviews that highlight restless nights and strange phenomena.

“The first family the owned the house after the Civil War had a kid named Gustav Julian. Some psychics believe that Gustav haunts the dairy farm. Ghost investigators have actually managed to capture thermal images of what looks like a man standing behind one of the windows. Supposedly there are 3 more ghosts inside the barn and all of them are incredibly aggressive towards men. EVP recordings have managed to capture a voice telling folks to ‘GET OUT!'”

“In 1959, Joline Woods died of breast cancer in the house. In 1965, Park Jr. was found dead… hung by his necktie from the rafters. Despite the fact that his hands had been tied behind his back, and that he was hung from a considerable height, his death was ruled as suicide.”

The Black Swan Inn has had several investigators and television shows do their chain rattling on its grounds. “Sightings” and “Ghost Adventures” some of the more famous. Some of the world’s most prolific artists – George Straits, Jerry Jeff Walker, and Flaco Jimenez – have had some encounter or another while visiting the house.

“It really is one of Texas’ most haunted house. Maybe not most famous, but certainly its spookiest.”